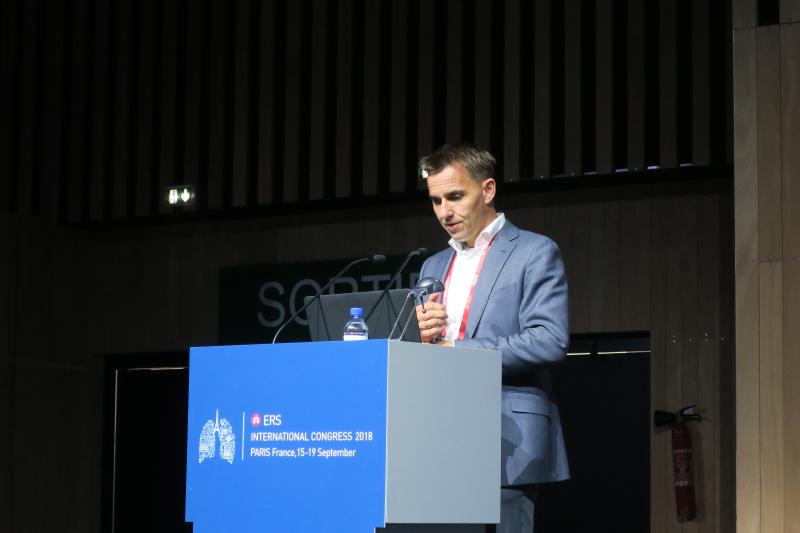 “We have been able to significantly reduce chronic respiratory symptoms such as shortness of breath, exacerbations of the disease, infections and hospitalizations in a group of COPD patients who are already on aggressive medical therapy,” said Dr Dirk-Jan Slebos of the University Medical Centre Groningen in Groningen, the Netherlands.

Targeted lung denervation is a novel bronchoscopic intervention that opens obstructed airways by targeting radiofrequency to airway cholinergic nerves, leading to relaxation of airway muscles as well as decreased airway inflammation and mucus production. Anti-cholinergic drugs used for treating COPD also target the same pathway; but combining drug therapy with lung denervation seems to confer additional benefits for patients, even in those who have been heavily treated.

The primary endpoint of adverse COPD-related event occurred in significantly fewer patients treated with denervation than with sham during the 3–6 months after the procedure (32 percent vs 70 percent; p=0.0008).

Within the year following the procedure, the rate of severe COPD exacerbations was also significantly reduced with denervation vs sham (p=0.039).

“The lower rate of respiratory events with targeted lung denervation was predominantly driven by reduction in COPD exacerbations and dyspnoea,” observed Slebos.

Furthermore, lung denervation reduced the rate of hospitalization for respiratory complications by more than half compared with sham exposure.

Other secondary outcomes including lung function (indicated by FVC**) and quality of life (measured on SGRQ-C***) between 6–12 months post-procedure trended towards an improvement with denervation vs sham.

“This has important implications for patient quality of life, and also healthcare costs, as these are events that have a significant impact on the cost of caring for these patients,” said Slebos.

Overall, serious adverse events occurred at similar rates between the two groups, with no incidence of haemoptysis, pneumothorax, or death reported during the year following the procedure. About 12 percent of patients who underwent denervation experienced gastrointestinal problems, such as bloating, nausea, and abdominal discomfort, but these were transient and were resolved by 6 months.

According to Slebos, the gastroesophageal symptoms occurred because the radiofrequency energy could affect the nearby parasympathetic nervous system in the gullet. “We are improving our process and imaging in order to better understand where these gastric nerves are, and we have implemented additional measures to improve our ability to avoid them in future procedures.”

He also added that a phase III trial (AIRFLOW-3) involving a larger sample size is currently being planned.

“These are really exciting and important results … [The study shows that targeted lung denervation] can make a significant difference to the health of patients,” said Chair of ERS Education Council Professor Daiana Stolz from University Hospital Basel, Switzerland, who was unrelated to the study.

“Better treatments for COPD patients, particularly those with severe disease, are desperately needed and we look forward to the results from the AIRFLOW-3 trial, which we hope will confirm this as an effective and safe treatment.”