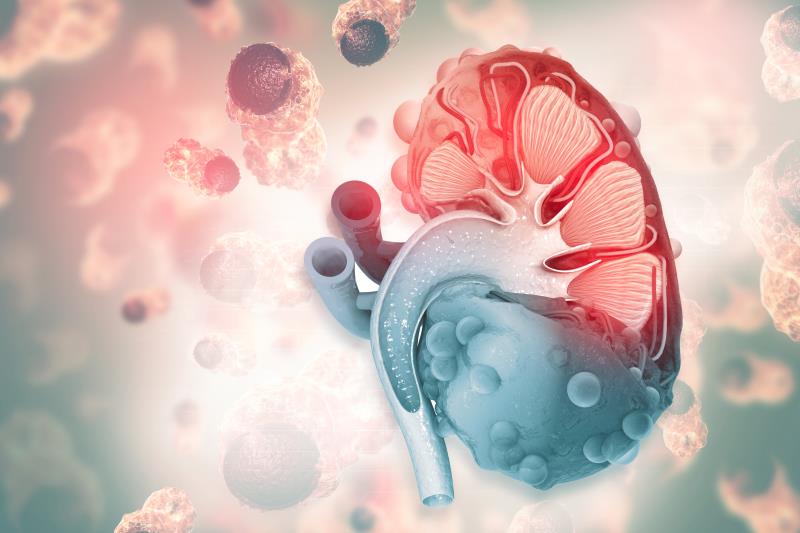 The use of pembrolizumab significantly improved disease-free survival (DFS) in patients with clear-cell renal cell carcinoma (RCC) who have undergone nephrectomy, with or without metastasectomy, and were at high risk for recurrence, according to the phase III KEYNOTE-564 trial.

“At the prespecified first interim analysis, [our study] showed that adjuvant pembrolizumab therapy conferred a significant and clinically meaningful improvement in DFS vs placebo among patients with RCC who were at intermediate-to-high risk or high risk for recurrence after nephrectomy or who had M1 NED* status after nephrectomy and resection of metastatic lesions,” said the researchers.

“Therefore, adjuvant-therapy use in patients with RCC after nephrectomy is limited owing to a dearth of evidence in support of currently available options,” the researchers noted. “Anti-PD-1 antibodies such as pembrolizumab have shown activity as monotherapy and in combination with other agents in patients with advanced RCC and may thus present a potential adjuvant strategy for treating this disease.”

At 24 months, more pembrolizumab vs placebo recipients were alive and recurrence-free (77 percent vs 68 percent), translating to a lower risk of disease recurrence or death with the former vs the latter (hazard ratio [HR] for recurrence or death, 0.68; ptwo-sided=0.002).

“DFS curves separated early and remained separated, with a steady difference in the estimated DFS of at least 9 percentage points at 12 and 24 months,” the researchers explained. However, the numbers at risk beyond 24 months were small and should thus be interpreted with caution.

The incidence of grade ≥3 any-cause AEs was greater with pembrolizumab vs placebo (32 percent vs 18 percent), as was the rate of discontinuation due to AEs but most were nonserious (21 percent vs 2 percent). There were no treatment-related deaths tied to pembrolizumab.

Given the increasing prevalence of localized RCC and likelihood of recurrence post-surgery, it is imperative to have an effective adjuvant treatment strategy for patients with this tumour type, said the researchers. With no consistent benefit from VEGF**-targeted therapies and other approaches, the current results support the use of pembrolizumab as adjuvant immunotherapy in this setting.

DFS was consistent across subgroups***, but the fractions of patients and events were small in some subgroups and should therefore be interpreted with caution. “[Nonetheless,] subgroup analyses … will provide further understanding of the degree of benefit across risk groups. This information will be important in the individualization of therapy based on a patient’s risk assessment to avoid overtreatment and prevent toxic side effects of therapy,” said Dr Rana McKay from the University of California, San Diego, La Jolla, California, US, in an editorial.

Longer follow-up is also imperative to assess the effect of pembrolizumab on overall survival (OS). “Long-term cure of patients remains a cornerstone goal of adjuvant therapy … [As OS data were still immature,] additional data regarding OS will be important in guiding the decision about early use of single-agent pembrolizumab as adjuvant therapy, as compared with the delayed use of combination therapies in patients with metastatic disease,” added McKay.

Dawn of a new era in RCC treatment

“A clinically beneficial adjuvant therapy has been much anticipated for patients with RCC. The results of this trial herald the dawn of a new era in the treatment of RCC,” said McKay. “[Nonetheless,] the adoption of adjuvant ICIs# brings along new questions regarding patient selection, therapeutic use in patients with non-clear-cell RCC, and systemic treatment after recurrence during or after the receipt of adjuvant therapy.”

Ongoing trials are exploring other agents and treatment durations to inform perioperative use of ICIs. Biomarker evaluations are also warranted to identify patients at highest risk for recurrence and monitor patients following surgery or adjuvant treatment, McKay added.