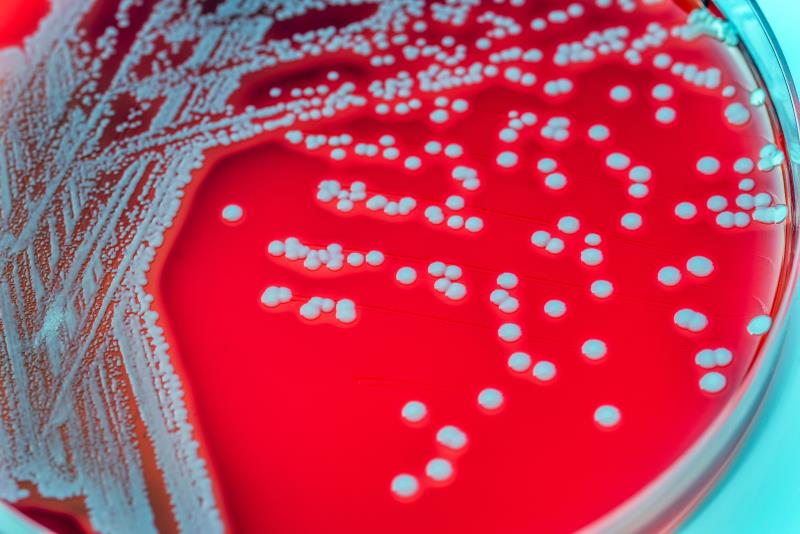 Adjunctive daptomycin in addition to standard-of-care (SoC) treatment does not reduce the duration of bloodstream infections caused by methicillin-susceptible Staphylococcus aureus (MSSA), according to the DASH* study presented at ID Week 2020.

The study, conducted in two hospitals in Montreal, Canada, involved 115 adults with monomicrobial bloodstream infections due to MSSA who had been treated with cefazolin or cloxacillin monotherapy. They were enrolled within 72 hours of the first positive blood culture and randomized to receive either adjunctive intravenous daptomycin (6 mg/kg) or placebo for 5 days in addition to SoC** treatment. The intention-to-treat analysis included 104 patients, 53 and 51 in the daptomycin and placebo groups, respectively (median age 67 years, 34.5 percent female).

The duration of bloodstream infection due to MSSA was comparable between those who received adjunctive daptomycin and placebo (median 2.04 vs 1.65 days, absolute difference 0.39 days; p=0.40). [ID Week 2020, abstract 117]

Incidence of relapsed bloodstream infection was rare and comparable between the daptomycin and placebo groups (n=3 vs 2; p=1.0). There was also no between-group difference with regard to incidence of embolic or metastatic MSSA within 90 days (24.5 percent vs 17.7 percent; p=0.47).

There was no difference between the daptomycin and placebo groups for nephrotoxicity on presentation (17.0 percent vs 11.8 percent; p=0.57). However, there was a trend toward increased nephrotoxicity in the daptomycin vs placebo arm within 7 days of treatment (47.7 percent vs 28.9 percent; p=0.15). Hepatotoxicity (n=2 vs 3; p=0.675) and rhabdomyolysis (n=0 vs 3) incidence did not differ between groups.

While there are no treatment guidelines specific to MSSA, European and US guidelines for endocarditis favour the use of anti-staphylococcal penicillin for MSSA bacteraemia with cefazolin as an alternative option, he continued.

“Our data support current guideline recommendations,” said Cheng. “Among patients with MSSA bloodstream infections, the administration of adjunctive daptomycin therapy to SoC treatment did not shorten the duration of bacteraemia,” said Cheng and co-authors.