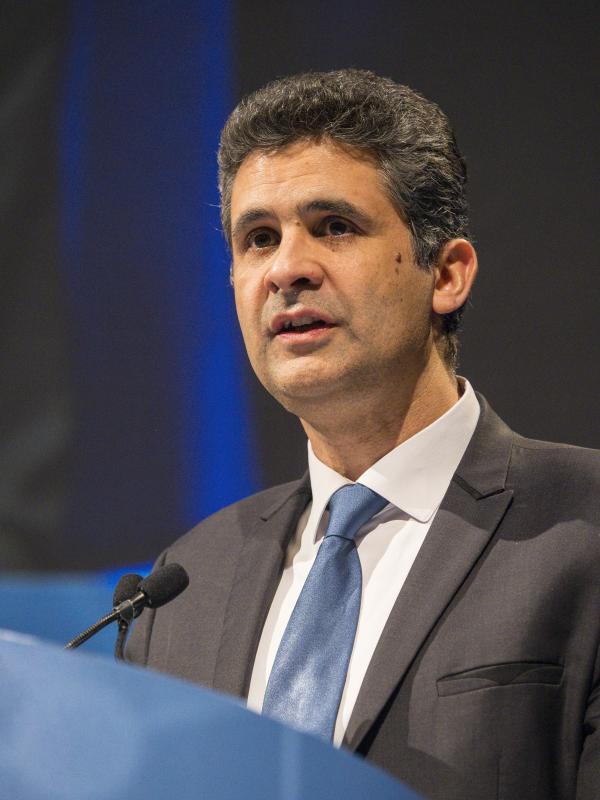 Men with nonmetastatic castration-resistant prostate cancer (nmCRPC) more than halved their risk of dying or developing distant metastasis when treated with darolutamide in addition to androgen deprivation therapy (ADT), according to findings of the phase III ARAMIS* trial.

“MFS was improved regardless of PSA doubling time, use of bone targeting agents, the Gleason score, or age,” said Fizazi.

Serious treatment-emergent adverse events (TEAEs) of any grade occurred at a similar rate between groups (24.8 percent vs 20 percent), as did discontinuation due to TEAEs (8.9 percent vs 8.7 percent). The most common grade 3–4 TEAEs were hypertension and urinary retention which occurred in 3.1 and 1.6 percent, respectively, in darolutamide recipients and 2.2 and 2.0 percent, respectively, in placebo recipients.

“[G]rade 3–4 AEs were rarely observed in the trial, which is an important finding for a vast population of asymptomatic men,” said Fizazi. “Quality of life was meaningfully preserved with darolutamide compared with placebo [with] patient-reported scores tending to favour darolutamide for pain and urinary symptoms,” he added.

According to Fizazi, apalutamide and enzalutamide, which have shown encouraging results in improving MFS in nmCRPC, are associated with AEs such as fatigue, falls, and fractures compared with placebo.

In ARAMIS, the incidence of AEs of interest such as fractures and falls occurred at a similar rate between darolutamide and placebo recipients (4.2 percent vs 3.6 percent [fractures] and 4.2 percent vs 4.7 percent [falls]), he said.

“[Furthermore], darolutamide does not cross the blood-brain barrier, which may result in less central nervous system-related side effects,” Fizazi said, highlighting the comparable incidences of fatigue (15.8 percent vs 11.4 percent), dizziness (4.5 percent vs 4.0 percent), cognitive disorder (0.4 percent vs 0.2 percent), memory impairment (0.5 percent vs 1.3 percent), and seizure (0.2 percent in each group) between darolutamide and placebo recipients. Despite patients with a history of seizure being included, none of them experienced a seizure during the trial.

“Darolutamide seems to be very non-toxic as far as we can tell [and] should become a new standard of care for men with high-risk [nonmetastatic] CRPC,” concluded Fizazi.