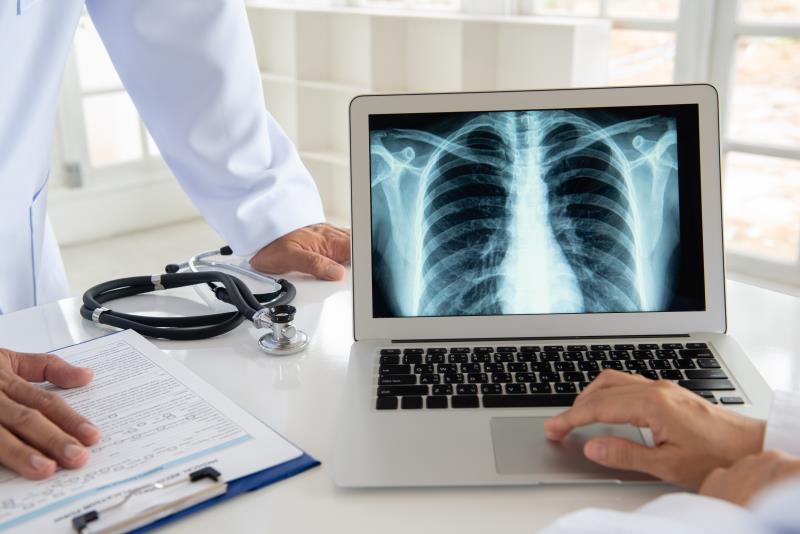 The addition of the monoclonal anti-interleukin-1β antibody canakinumab to the standard of care (SoC) regimen of platinum doublet chemotherapy and pembrolizumab in the first-line setting did not improve progression-free survival (PFS) or overall survival (OS) in patients with advanced non-small-cell lung cancer (NSCLC), results of the phase III CANOPY-1 trial showed.

Study participants were 643 patients (median age 63 years, 71–72 percent male) with previously untreated stage IIIB–IV NSCLC of any histology (69–70 percent with non-squamous histology), known PD-L1 status, ECOG performance status 0–1, and without EGFR and/or ALK alterations. They received four cycles of intravenous pembrolizumab and histology-guided platinum-based doublet chemotherapy Q3W and were randomized 1:1 to receive either subcutaneous canakinumab (200 mg) or placebo Q3W. This was followed by canakinumab or placebo (based on previous randomization) plus pembrolizumab with or without pemetrexed as maintenance.

“We did not observe any significant biomarker subsets that especially benefitted from the addition of canakinumab,” said study author Dr Daniel Tan from the National Cancer Centre Singapore.

There were more dose adjustments and interruptions due to AEs in the canakinumab vs placebo arm, noted Tan.

“No unexpected safety findings were observed with the addition of canakinumab to pembrolizumab plus platinum doublet chemotherapy,” said Tan.

Twenty-four and 22 percent of patients in the canakinumab and placebo arms, respectively, are still on treatment. The median duration of treatment was 8.7 and 7.9 months, respectively. The primary reason for treatment discontinuation was progressive disease (46.6 and 45.8 percent, respectively).

According to exploratory analysis, baseline high sensitivity C-reactive protein and interleukin 6 levels were prognostic factors with a decrease in levels noted in both study arms, but especially so with canakinumab, said Tan.