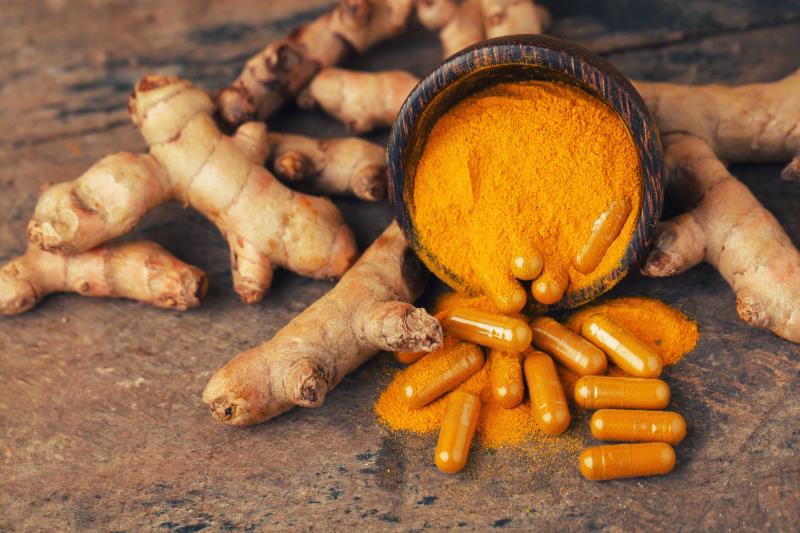 Adding curcuminoid complex (CC)* to diclofenac led to greater improvements in pain and functional capacity with better tolerability in individuals with knee osteoarthritis (OA), an Indian study has shown, highlighting the potential of CC as an alternative for knee OA management.

Given the reported analgesic, anti-inflammatory, and gastroprotective properties tied to curcumin and/or its derivatives, the team sought to evaluate its effects in 140 adults with knee OA. Participants were randomized 1:1 to receive diclofenac 50 mg BID either alone (diclofenac arm) or in combination with CC 500 mg BID (CC arm) for 4 weeks. [Medicine 2020;99:e19723]

“Every patient in [the CC arm] had >50 percent reduction in Visual Analogue Scale score from baseline levels compared to only 67 patients in the diclofenac arm … [This] clearly shows the significant analgesic property of [the combo regimen],” said the researchers.

The rate of rescue analgesic use was lower in the CC vs the diclofenac arm (3 percent vs 17 percent; p<0.005), as was H2 blocker use (6 percent vs 28 percent; p<0.001). The former depicts the more stable pain control with CC-diclofenac, while the latter underpins the anti-ulcer potential of CC, they noted.

Apart from the ability of CC to potentiate the analgesic effect of NSAIDs, its gastroprotective and anti-ulcer effects may also aid in reducing the adverse gastrointestinal effects of NSAIDs, they added.

The incidence of adverse events – which were mostly mild and transient – was also significantly lower in the CC vs the diclofenac arm (13 percent vs 38 percent; p<0.001). The greater fraction of patients favouring CC-diclofenac over diclofenac alone (30 percent vs 17 percent) reflects the better acceptability profile of the combo regimen, noted the researchers.

A major drawback of curcumin is its poor pharmacokinetic/pharmacodynamic properties, which may curtail its therapeutic efficacy. [J Med Chem 2017;60:1620-1637; Int J Cancer 2010;126:1771-1775] Combining curcuminoids with essential turmeric oil and turmerones may enhance its bioavailability which, as per the researchers, may have been responsible for the benefits of CC seen in the study.

“[Our findings suggest a] synergistic effect between CC and diclofenac … [Both] curcumin and NSAIDs … inhibit COX-2 by different mechanisms – curcumin downregulates COX-2 mRNA and protein levels, while NSAID inhibits COX enzyme activity directly by binding to its active site,” they said. “[D]ue to its high bioavailability, [CC may be given] along with diclofenac … if monotherapy is inadequate.”

The favourable effects of add-on CC appear to meet the primary goals of knee OA therapy, which focus on pain relief and physical function improvement, as well as slowing the progression of underlying structural damage, said the researchers.

However, the short study duration, lack of placebo arm, and use of subjective pain measurements are potential limitations, they pointed out. Longer trials are thus warranted to ascertain the long-term efficacy and safety of the combo regimen. Its effects in the different stages of knee OA should also be explored in future trials, they added.