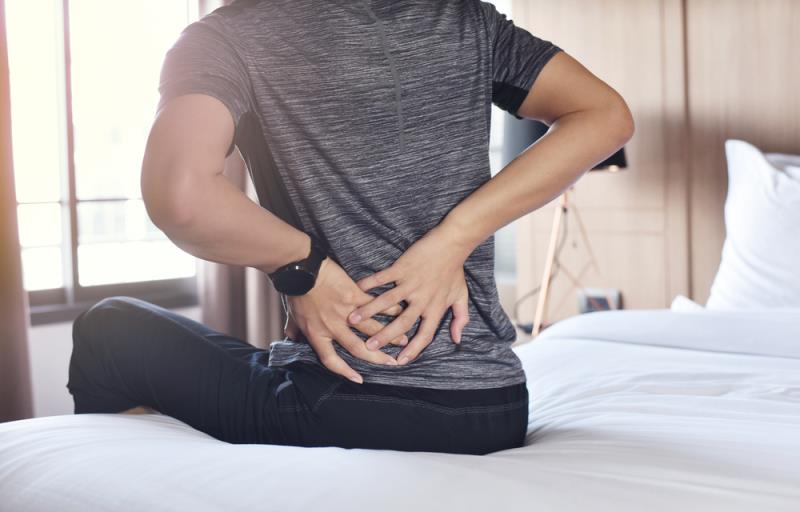 History and presentation
A 32-year-old previously healthy male patient complained of idiopathic left hip pain on 16 August 2018. On 21 August 2018, he was admitted to an orthopaedic ward of a private hospital due to increased pain and swelling of the left hip with associated weakness. The patient reported no history of recent or old trauma. He had no known bleeding tendencies or family history of blood disorders.

On 22 August 2018, MRI showed a large hyperintense lesion along the left psoas and iliacus muscles, measuring 6.9 cm x 5.6 cm x 13.9 cm. An incision and drainage revealed a blood clot and no abscess.

Upon referral to a haematologist, coagulation tests showed an isolated prolonged APTT of 57.5 seconds with normal prothrombin time. On 26 August 2018, mixing study with normal plasma showed near complete correction of APTT to 35.7 seconds. The patient also had reduced factor VIII (FVIII) activity (FVIII:C) of 5.4 percent, suggesting FVIII deficiency consistent with mild haemophilia A. He was recommended to receive FVIII replacement therapy and was transferred to our hospital on 30 August 2018 for further management.

Treatment and response
On 31 August 2018, the patient’s haemoglobin decreased to 8.8 g/dL, with isolated prolonged APTT of 51.5 seconds and reduced FVIII:C of 14.8 percent. He was started on intravenous FVIII replacement therapy, but it did not lead to sustained increases in FVIII levels. He also experienced multiple bleeding episodes throughout 3–17 September 2018, with persistently prolonged APTT and increased left hip pain and low haemoglobin (ie, approximately 9–10 g/dL).

On 3 September 2018, CT scan showed progression of the left psoas muscle haematoma. (Figure 1A) This was successfully addressed with embolization the following day. 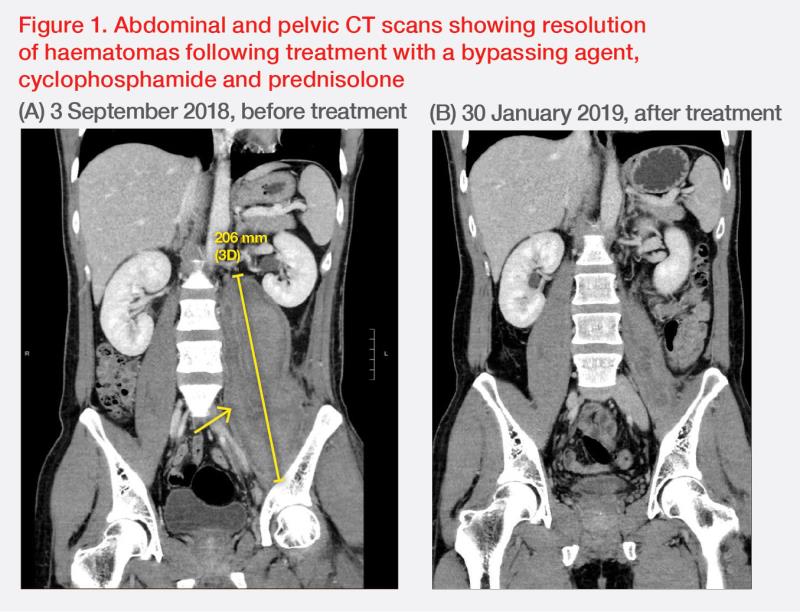 At that stage, acquired haemophilia A (AHA) was suspected. While awaiting further examinations, the patient was given a bypassing agent on 17 and 18 September 2018. He also simultaneously started treatment with prednisolone at 30 mg BID.

On 18 September 2018, ultrasound-guided thrombin injection was performed for the bleeding from the pseudoaneurysm. APTT mixing study showed the presence of both immediate and time-dependent inhibition, while Bethesda assay showed a FVIII inhibitor level of 1.91 Bethesda unit (BU)/mL. FVIII:C was 19.2 percent. These results were consistent with AHA with specific FVIII inhibitor.

On 20 September 2018, the patient started receiving oral cyclophosphamide at 100 mg QD. His APTT started to normalize and his haemoglobin level gradually improved. FVIII replacement therapy was tapered and discontinued on 25 September 2018.

Follow-up CT scans showed interval decreases in size and ultimately resolution of the haematomas. (Figure 1B) No further bleeding episodes were reported. Cyclophosphamide and prednisolone were tapered and subsequently discontinued in January and February 2019, respectively. On 8 October 2018, FVIII:C was 53.5 percent with no inhibitors detected. After rehabilitation, the patient was discharged on 16 October 2018.

The patient is currently well and in remission. A repeat FVIII inhibitor assay on 8 September 2019 showed negative results. He also had negative results for autoimmune and tumour markers, suggesting no underlying disease that may have caused the AHA.

Discussion
AHA is a rare and life-threatening bleeding disorder that often results from the development of inhibitors or autoantibodies to FVIII. Its presentation is often unpredictable and may be associated with sudden, spontaneous bleeding with no genetic links.1-3 Diagnosis is challenging and often delayed due to the lack of familiarity with AHA among many clinicians who first encounter these patients.4

AHA is usually detected in elderly patients >70 years of age.1,2 In younger adults, a unique population includes peri- and postpartum women who may develop FVIII autoantibodies during pregnancy.2,5 These typical patient profiles may have contributed to the low index of suspicion for AHA in our patient and why a congenital aetiology was initially suspected.4,6

Correct and prompt AHA diagnosis is crucial because up to 90 percent of bleeds may be severe or life-threatening, and up to 10 percent may be fatal.7,8 AHA diagnosis should be considered in patients with prolonged and isolated APTT regardless of the presence or absence of bleeding.4 For instance, in the European Acquired Haemophilia registry (EACH2), approximately 10 percent of patients were diagnosed based on prolonged APTT alone, with about 7 percent of these patients experiencing no bleeding at all.2

AHA diagnosis may be suspected with a positive mixing study and confirmed with reduced FVIII:C and detection of neutralizing autoantibodies with the Bethesda assay.9,10 This may also be complemented by an immunological approach for FVIII antibody testing with FVIII ELISA.11

AHA management involves controlling and preventing further bleeding episodes with the first-line use of bypassing agents, followed by eliminating FVIII autoantibodies via immunosuppression and treating any underlying conditions associated with AHA (eg, malignancy and autoimmune causes).6,12

Either of the two currently available bypassing agents (ie, recombinant FVlla [rFVIIa] or activated prothrombin complex concentrates [APCC]) may be used in the first-line setting, as both showed the same level of bleeding control in patients with AHA in the EACH2 registry (93.0 percent for both; p=1).13 In addition, EACH2 registry findings indicated that first-line immunosuppression with steroids plus cyclophosphamide was associated with higher stable complete remission rates vs steroids alone (odds ratio, 3.25; 95 percent confidence interval, 1.51–6.96; p<0.001).14

No underlying causes of AHA were identified in our patient. Nevertheless, he still achieved remission with rFVIIa and predinisolone plus cyclophosphamide despite a 1-month delay in AHA diagnosis.

In summary, AHA should not be excluded as a potential diagnosis in atypical cases, such as young and previously well male patients. AHA should be considered in all cases of spontaneous bleeding and isolated prolonged APTT with no history of trauma or past bleeding episodes, as well as in the absence of family history of blood disorders. Once AHA diagnosis is confirmed, bleeding control can be achieved using either rFVIIa or APCC, along with eradicating FVIII inhibitors with immunosuppression, and identifying and addressing any underlying disease.