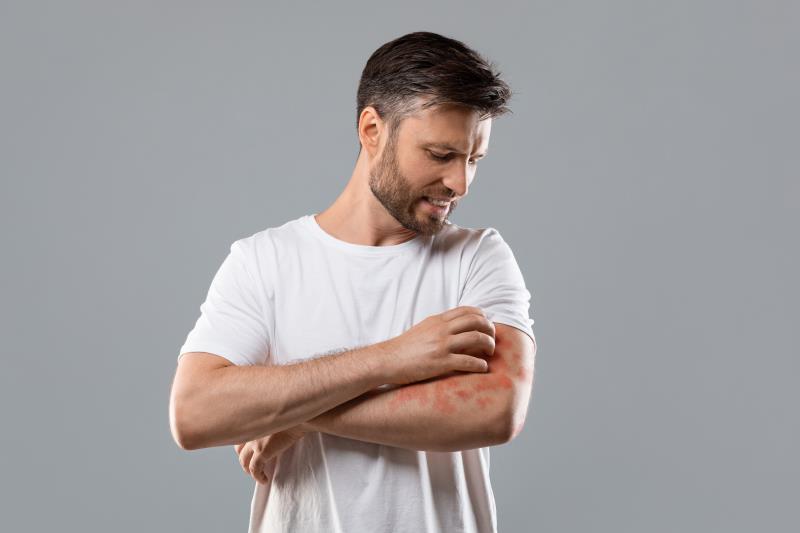 The oral selective JAK*1 inhibitor abrocitinib is superior to dupilumab for relieving itch and achieving skin clearance in people with moderate-to-severe atopic dermatitis (AD), according to results from a head-to-head comparison in the JADE DARE trial presented at EADV 2021.

Significantly more patients treated with abrocitinib had reduced itch, as indicated by ≥4-point improvement in PP-NRS** score at week 2, compared with those on dupilumab (48 percent vs 26 percent; p<0.0001). [EADV 2021, session D3T01.2B]

The coprimary outcome of EASI-90*** response at week 4 was also achieved by significantly more patients in the abrocitinib group than the dupilumab group (29 percent vs 15 percent; p<0.0001).

The clinical benefit of abrocitinib occurred early on despite most patients enrolled were on topical corticosteroids, signifying that the benefit seen was clinically relevant in practice, according to the investigators.

The relatively rapid itch relief conferred by abrocitinib relative to dupilumab — which presents one of the greatest needs of patients with AD — will likely appeal to patients, according to experts.

Although the difference between the two treatments narrowed over time, abrocitinib remained beneficial over dupilumab through week 26 for both primary endpoints, with the difference still being statistically significant for EASI-90 response.

In terms of safety, 74 percent of patients in the abrocitinib arm compared with 65 percent in the dupilumab arm had ≥1 treatment-emergent adverse events (AEs). The incidence of serious AEs was similar between the two treatment arms (2 percent each).

There were two deaths during the study, but none were considered to be related to the study medication (one was due to COVID-19 and the other was a cardiovascular case). No unexpected laboratory abnormalities were seen in either group.

Abrocitinib was first approved just recently in the UK, followed by Japan in October, for moderate-to-severe AD. It is currently under review in the US and elsewhere in the EU for the treatment of AD.