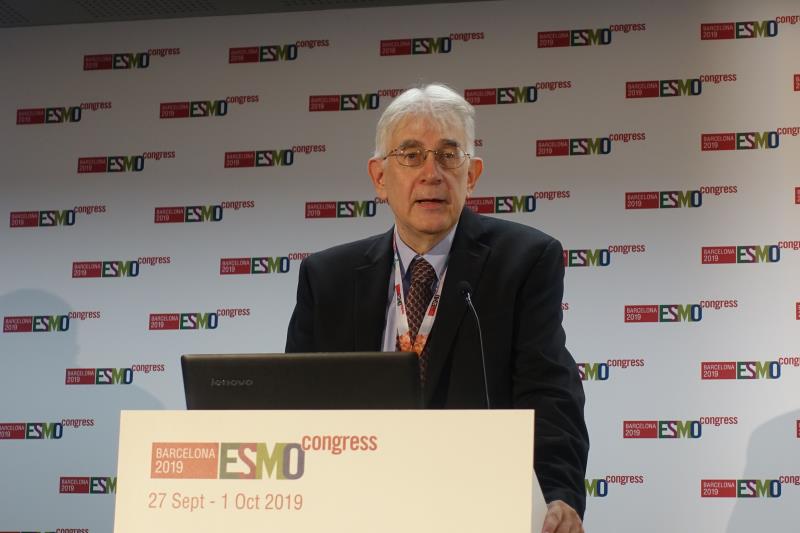 A combination of the CDK 4/6 inhibitor abemaciclib with fulvestrant improved overall survival (OS) in patients with HR+, HER2- advanced breast cancer (ABC), with a trend toward improved outcomes in patients with poor prognosis, according to results of the phase III MONARCH 2* trial presented at ESMO 2019.

“The addition of abemaciclib to fulvestrant provided a statistically significant OS improvement in patients with HR+, HER2- ABC who progressed on prior endocrine therapy [with a] median OS benefit [of] 9.4 months,” said first author Professor George W. Sledge Jr from Stanford University School of Medicine, Stanford, California, US.

“To our knowledge, these data constitute the largest absolute OS benefit reported so far in a phase III clinical trial for HR+, [HER2-] ABC,” said the authors.

A total of 669 pre-, peri-, or postmenopausal women with HR+, HER2- ABC and ECOG performance score ≤1 who were chemotherapy-naïve and resistant to endocrine therapy** (≤1 treatment) were randomized 2:1 to receive abemaciclib (150 mg BID) plus fulvestrant (500 mg; median age 59 years) or fulvestrant alone (plus placebo; median age 62 years). Patients were followed up for a median 47.7 months, at which point 17 and 4 percent of patients in the abemaciclib-fulvestrant and fulvestrant-alone arms, respectively, remained on treatment.

The favourable OS results with abemaciclib-fulvestrant were consistent regardless of whether patients had primary or secondary endocrine resistance (pinteraction=0.588) or visceral, bone-only, or other soft tissue metastases (pinteraction=0.424). However, a numerically greater impact was seen in patients with poorer prognosis, namely, those with primary endocrine resistance (HR, 0.686 vs HR, 0.787 [secondary resistance]) or visceral metastases (HR, 0.675 vs HR, 0.907 [bone only] and HR, 0.928 [other soft tissue sites]). Although presently undetermined, mechanisms behind these findings may include “the ability of abemaciclib to be dosed continuously and its greater potency for CDK4 over CDK6,” the authors said, noting that these outcomes need to be confirmed in future studies.

“If you look at the landmark analysis at 3 years, roughly three times as many patients on the combination arm are still on therapy compared with patients on the fulvestrant-alone arm (29.9 percent vs 10.1 percent),” said Sledge Jr.

In terms of safety, 58.7 and 22.9 percent of patients in the abemaciclib-fulvestrant and fulvestrant-only arms, respectively, experienced grade 3 adverse events (AEs), while 7.3 and 4.0 percent, respectively, experienced grade 4 AEs. The most common grade 3 AEs among abemaciclib-fulvestrant recipients were neutropenia (26.8 percent), diarrhoea (14.5 percent), and leukopenia (10.9 percent).

“Long-term abemaciclib safety profile was consistent with that of the primary analysis,” said Sledge Jr. “[These findings support] a generally tolerable and manageable safety profile for abemaciclib plus fulvestrant,” said the authors.

“The main take-home message from this study – and from other similar studies – is that CDK4/6 inhibitors significantly prolong the time patients remain in remission and significantly improve OS. Therefore, it is very reasonable to think of these as standard-of-care options for patients with metastatic breast cancer,” concluded Sledge Jr.

“Together with the data we have seen before with palbociclib and ribociclib, these new data strengthen the argument that we should start treatment in the metastatic setting with a CDK4/6 inhibitor plus endocrine therapy because these drugs substantially improve patient outcomes compared to anti-hormonal treatment alone,” commented Professor Nadia Harbeck from the University of Munich, Germany, who was not affiliated with the study.