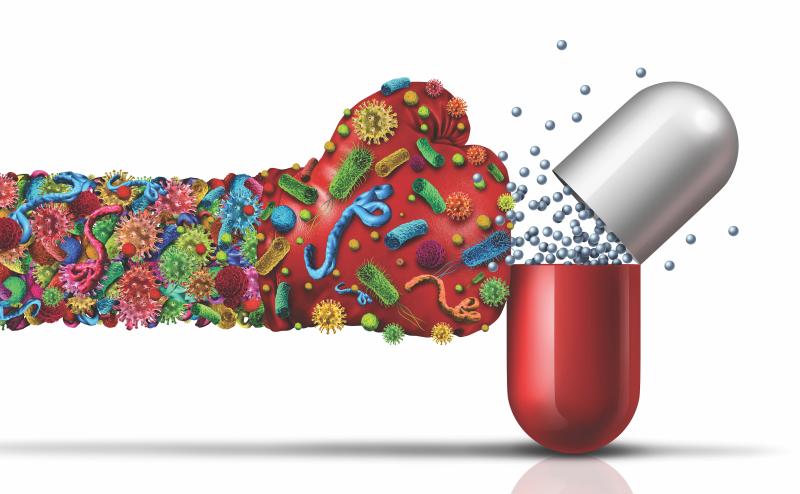 Multidrug-resistant organisms (MDROs) are frequently defined as bacteria with resistance to three or more classes of antimicrobials.1 Common examples include methicillin-resistant Staphylococcus aureus (MRSA), extended-spectrum beta-lactamases (ESBL)–producing Enterobacteriaceae, carbapenem-resistant Enterobacteriaceae (CRE) and vancomycin-resistant Enterococci (VRE). They are rapidly emerging as a major threat to our healthcare system. The selection of resistant bacteria could be accounted for by both the liberal use of antibiotics in clinical settings and the widespread application of antibiotics in different aspects of agriculture.2 As a result, isolation of MDROs is no longer limited to healthcare settings but also reported in the community. As the name MDRO implies, treatment options are limited and infections can lead to significant morbidity and mortality. The challenges of managing these infections are illustrated in the following two cases. 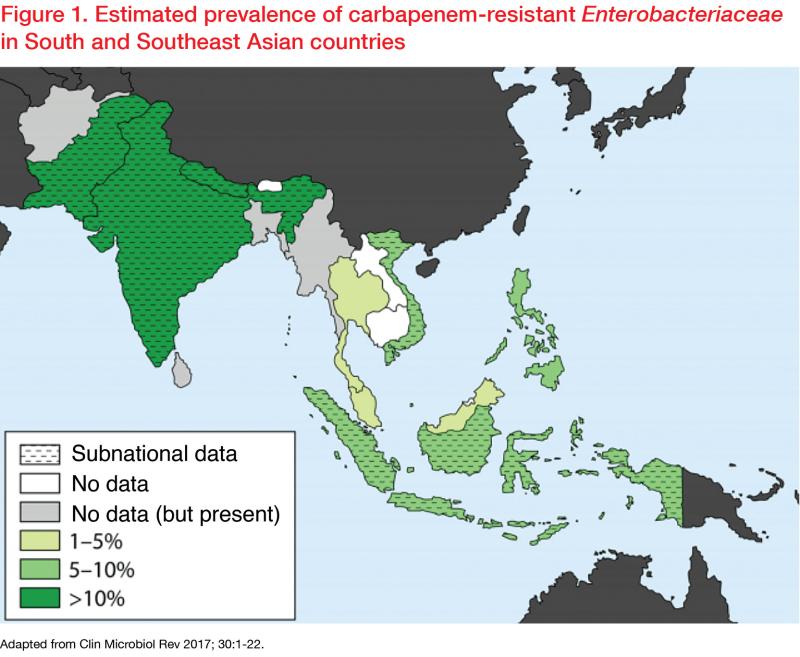 Fosfomycin is a phosphonic acid derivative that blocks the first step of cell wall synthesis. It has broad-spectrum activity against both Gram-positive and Gram-negative organisms, including ESBL and carbapenemase-producing Enterobacteriaceae. Its intravenous formulation may cause sodium overload as well as hypokalaemia. Colistin is a polypeptide antibiotic with a detergent effect on bacterial cell membrane, thereby facilitating penetration of other antibiotics into the bacteria. It is therefore often used as part of a combination therapy. Owing to the lack of consensus in dosing as well as the significant nephrotoxicity and neurotoxicity, consultation with an infectious disease specialist is warranted for the use of colistin. Two novel BLBLI combinations, ceftolozane/tazobactam and ceftazidime/avibactam, were approved in the mid 2010s as carbapenem-sparing options for treatment of complicated intra-abdominal and urinary tract infections as they demonstrated noninferiority compared with carbapenems. Ceftolozane/tazobactam is particularly effective against resistant Pseudomonas aeruginosa, while ceftazidime/avibactam harbours activity against class A and some class D carbapenemases.6 Various novel beta-lactams and BLBLIs that may target other carbapenemases are in the process of development.7

Combination therapy should be considered in patients with high-risk CPE infections, such as bacteraemia or those resulting in septic shock. It usually consists of a beta-lactam backbone (either a novel BLBLI if available, or high-dose meropenem with extended infusion) plus two or more older agents (such as fosfomycin, aminoglycosides and colistin). The exact choices would depend on susceptibility testing and sites of primary infections.8

As carbapenemase gene is carried on transferrable genetic elements, stringent infection control measures are pivotal in limiting its spread. Key components include strict contact precautions and patient isolation in single rooms with dedicated toilet facilities if available. Moreover, outbreaks of CPE colonization attributed to endoscopy, especially endoscopic retrograde cholangiopancreatography (ERCP), have been reported. This is likely the result of insufficient cleaning of the angular elevated channel. Endoscopy equipment should be properly sterilized. Use of disposable plastic sheaths and regular surveillance cultures have been suggested as additional remedies.9

A 59-year-old gentleman, with a background of alcoholic cirrhosis and renal impairment, had an episode of aortic valve endocarditis from Aggregatibacter aphrophilus, which was complicated by acute pulmonary oedema requiring prosthetic valve replacement in 2011. He subsequently developed five episodes of Enterococcus faecium bacteraemia between 2015 and 2018. Transoesophageal echocardiogram (TEE) during the first three episodes did not reveal vegetations, and gallium scan did not show other metastatic foci. He was given prolonged courses of vancomycin during the first four episodes. The fifth episode of E. faecium bacteraemia occurred just 2 weeks after completion of 6 weeks of vancomycin therapy for the fourth episode. The E. faecium strain isolated this time remained sensitive to vancomycin, but demonstrated aminoglycoside resistance. As vancomycin monotherapy is only bacteriostatic towards E. faecium and not very effective in biofilm-related infections, daptomycin plus ceftaroline combination therapy was chosen. Vegetations were not found at transthoracic echocardiogram (TTE), and the patient refused TEE. Gallium scan 3 weeks later did not detect other metastatic foci. Daptomycin and ceftaroline were given for 6 weeks, which resulted in bacteraemia clearance and defervescence. There was no recurrence of E. faecium bacteraemia or febrile episodes in the subsequent 6 months.

Enterococci are commensals in the human gastrointestinal tract. They are evolving as nosocomial pathogens because of their resistance to chemical stress induced by chlorine and alcohol-based disinfectants. E. faecalis accounts for 80 percent of enterococcal infections and is infrequently resistant to ampicillin. On the contrary, E. faecium is frequently resistant to ampicillin and occasionally even resistant to vancomycin. Genes mediating vancomycin resistance in E. faecium (VRE) are carried by plasmids, highlighting the importance of strict infection control measures.10

Combination therapy with cell wall–active agents (non-cephalosporin beta-lactams or vancomycin) plus high-dose aminoglycoside is often required for bactericidal activity in invasive enterococcal infections such as bacteraemia. Daptomycin is an attractive alternative against VRE, and its penetration into biofilm is superior to vancomycin. This lipopeptide antibiotic binds to bacterial membrane and is bactericidal through the disturbance of membrane potential. Important side effects of daptomycin include myopathy and eosinophilic pneumonitis. Ceftaroline is known as the “fifth-generation” cephalosporin with activity against MRSA. In spite of the conventional wisdom of intrinsic cephalosporin resistance among Enterococci, limited in vitro activity has been reported from ceftaroline. Beta-lactams in combination with daptomycin have been tested for synergism, with most consistent benefits reported for regimens containing ertapenem or ceftaroline. It is believed that beta-lactams facilitate daptomycin binding by reducing bacterial surface charge, and the combination also upregulates production of endogenous antimicrobial peptides.11 In short, daptomycin in combination with beta-lactams should be considered when E. faecium is found to have only intermediate daptomycin susceptibility, or in deep-seated infections such as infective endocarditis.12

MDROs are new threats that should not be ignored. In addition to infection control measures, antimicrobial stewardship in terms of appropriate de-escalation from broad-spectrum agents and shortening of treatment duration would help halt propagation and selection of resistant microbes. Through increased awareness among doctors and other healthcare professionals, concerted multidisciplinary input may help contain the damage from MDROs, while research and clinical applications of newer antimicrobials effective against these potentially deadly organisms are eagerly awaited.