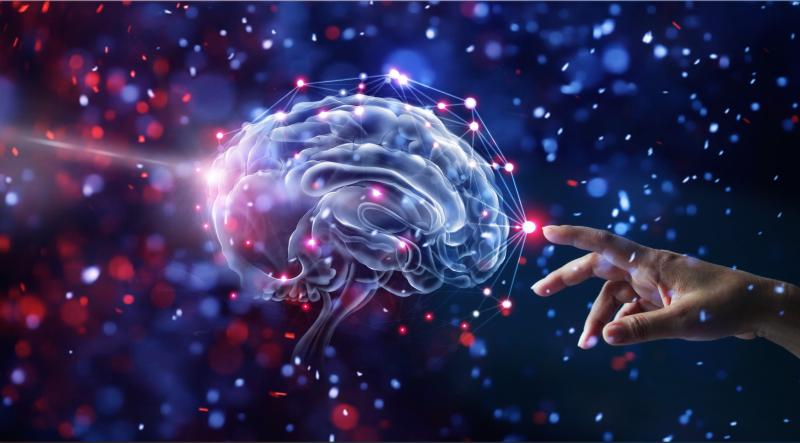 Ballism is a hyperkinetic movement disorder characterized by involuntary, irregular, dramatic, large-amplitude flinging movements involving proximal muscles. It is derived from a Greek word meaning “to throw”. When one side of the body is involved, the condition is termed hemiballism. Often, ballism evolves into more distal and lower-amplitude movements, which are referred to as chorea. There is considerable overlap in the appearances of ballism and chorea. Ballistic and choreiform movements may coexist in many patients, and it is not uncommon for ballism to evolve into a more distal and lower-amplitude chorea. Thus, chorea and ballism are viewed as part of a clinical spectrum of the same pathophysiological process, and consequently the term “hemichorea-hemiballism” (HC-HB) is frequently used in the literature. In traditional teaching, it is pathognomonic of a lesion in the contralateral subthalamic nucleus (STN). In this article, we present two cases with similar clinical presentations due to different underlying aetiologies.

A 73-year-old man with good past health presented to the emergency department with a few days’ history of involuntary low-amplitude unpredictable movements of his left arms and legs. He did not have any motor weakness, sensory changes, and visual or speech disturbances. He was a chronic smoker and had no family history of neurologic diseases. Physical examination was notable for left hemichorea. His sensorium was normal and he had full limb power. Blood tests showed normal biochemistry results. Fasting blood glucose was 5.4 mmol/L and LDL-cholesterol was 3.5 mmol/L. MRI brain revealed a small restricted diffusion focus over the right high frontoparietal lobe, compatible with an early subacute infarct. (Figure 1) His involuntary movements subsided gradually over a day and he was started on aspirin for secondary prophylaxis of stroke. 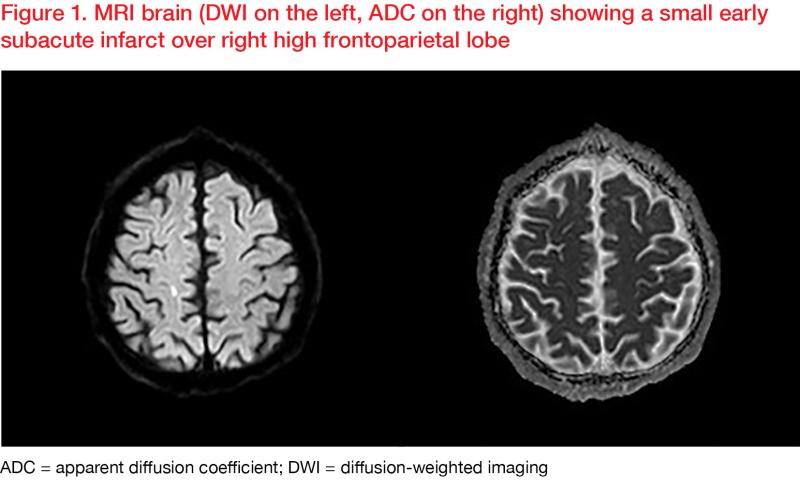 An 84-year-old man with a few years’ history of type 2 diabetes mellitus was admitted with 2 days’ history of involuntary flinging movements of his right arm and leg. These movements were not suppressible and interfered with sleep and activity. He had defaulted follow-up for his diabetes for a month before admission. Same as the previous case, this patient had no other neurological deficits on examination apart from hemiballism. Blood tests showed high blood glucose (18 mmol/L) and HbA1c (13.7 percent) with no acidosis. Plain CT brain showed hyperdensity over the left basal ganglia. (Figure 2) MRI brain demonstrated T1-hyperintense and T2-hypointense left caudate and lentiform nuclei. (Figure 3) There was no discrete focus of restricted diffusion to suggest acute infarction. He was started on an oral hypoglycaemic agent and a short course of tetrabenazine. His involuntary movements subsided gradually over a few weeks. 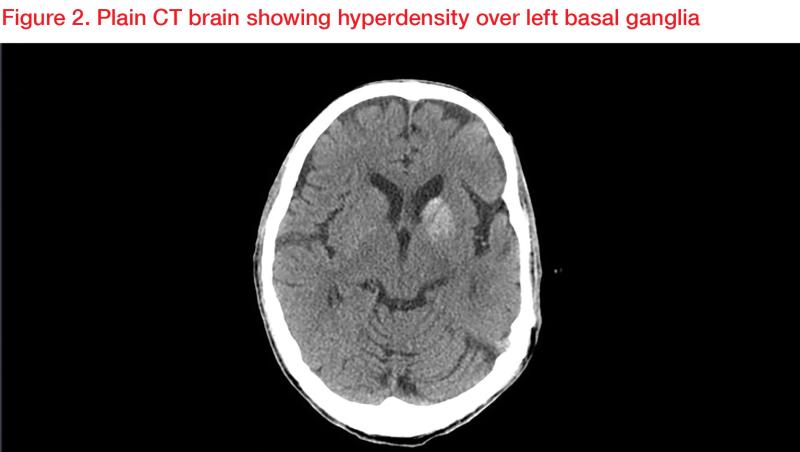 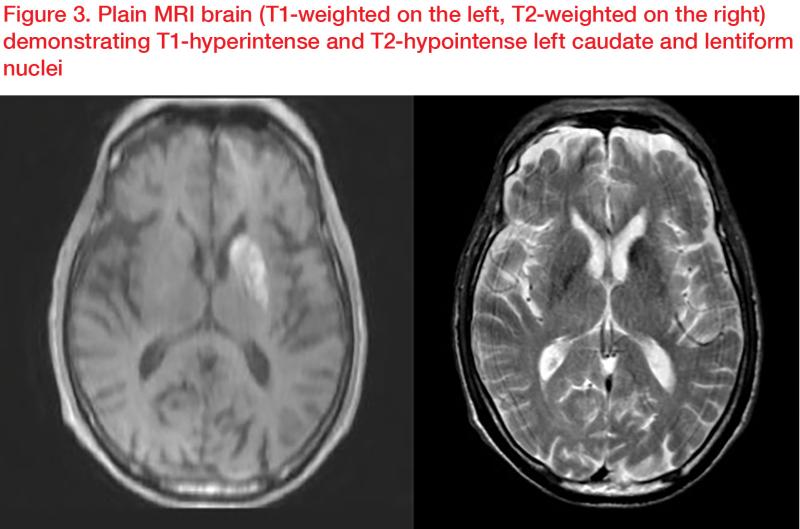 HC-HB is a movement disorder typically characterized by rapid involuntary jerky movements and periodic uncoordinated swings involving a unilateral limb, as manifesting in our patients. Traditionally, its emergence points to a structural lesion or metabolic dysfunction in the region of the STN on the side contralateral to the movements.1

Stroke represents up to 22 percent of secondary movement disorders, and involuntary movements develop after 1–4 percent of stroke cases.2 Post-stroke movement disorders can manifest in a wide range of hyperkinetic movement disorders, including HC-HB, dystonia, tremor, myoclonus and athetosis. HC-HB is the most common movement disorder following stroke.3 Although the classical location of lesions causing hemiballism is the STN, lesions affecting various areas, such as striatum, thalamus, globus pallidus and cortex, are also possible causes, with lesions of the contralateral striatum being the commonest cause.4 It has been reported that transient ischaemic attacks (TIAs) secondary to middle cerebral artery (MCA) stenosis can present as recurrent episodes of HC-HB.5

Another important condition to be distinguished from stroke-induced HC-HB is hyperglycaemia-related HC-HB. It occurs in the setting of severe nonketotic hyperglycaemia (NKH) in the elderly and shows characteristic radiological finding. This condition was first described in 1960.6 Since then, multiple case reports and case series from different ethnic backgrounds have been published, with a majority of cases occurring in patients of Asian descent.7 The characteristic radiological finding is a high signal intensity basal ganglia lesion on T1-weighted brain MRI.8 Hence, the term “C-H-BG” has been coined for the hallmarks of chorea, hyperglycaemia and basal ganglia changes on MRI. The precise mechanism is unknown. Petechial haemorrhage in the putamen resulting from compromise of the blood-brain barrier is a leading hypothesis for this condition.9 It is important for clinicians to recognize C-H-BG as one of the rare and reversible complications of poorly controlled diabetes mellitus to ensure early diagnosis and management.

The treatment of HC-HB depends on the underlying aetiology. For hyperglycaemia-related HC-HB, normalization of blood glucose is the mainstay of treatment and often leads to complete resolution of symptoms. Treatment options for persistent HC-HB despite blood glucose control include neuroleptics, tetrabenazine and medications with GABAergic properties, including benzodiazepines. Tetrabenazine is a vesicular monoamine transporter inhibitor depleting dopamine and other central monoamines. It is used to treat chorea and other hyperkinetic movement disorders. For patients on tetrabenazine, clinicians should monitor possible adverse reactions such as Parkinsonism and depression/suicidality.