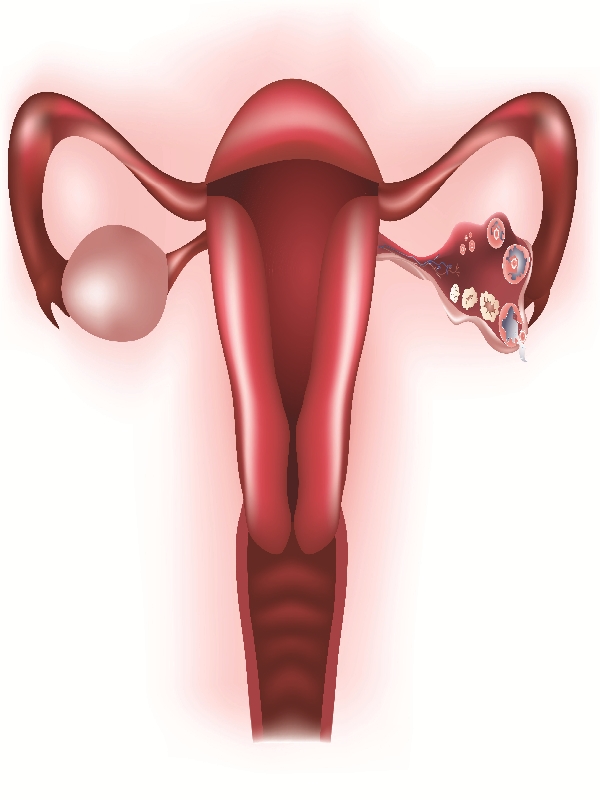 Presentation and history
A 49-year-old lady presented with on-and-off abdominal pain for a few months. She had a small body build (33 kg) and a history of ductal carcinoma in situ (DCIS) of breast but enjoyed good past health otherwise. CT scan of abdomen and pelvis showed a large omental cake with extensive peritoneal deposits but there was no liver or lymph node involvement. Her carcinoma antigen 125 (CA125) tumor marker level was markedly elevated (3,785 U/mL). With clinical diagnosis of ovarian cancer, she underwent staging laparotomy which showed frozen anterior pelvis with the tumor occupying the whole pouch of douglas (POD), extensive carcinomatosis at right diaphragmatic surface, mesentery and transverse colon. Her right ovary and fallopian tube appeared normal but her left ovary was not identifiable. Subtotal hysterectomy, bilateral salpingo-oophorectomies, transverse colectomy, appendectomy, infra-colic omentectomy and maximal tumor debulking were performed. However, gross residual tumor (>1 cm) was left behind at POD.

Post-operative PET-CT scan showed extensive residual hypermetabolic peritoneal deposits but the majority were plaque-like nodules. (Figure) There was no involvement of the liver or regional lymph nodes. Her post-operative CA125 was still markedly elevated (1,640 U/mL) 1 month after surgery.

The patient was then seen by a public cancer center and recruitment into a study of chemotherapy with or without Bevacizumab was offered. She decided to receive further treatment in the private sector. She was started on chemotherapy (Paclitaxel 175 mg/m2 and Carboplatin, AUC 5, repeated every 3 weeks) plus Bevacizumab (7.5 mg/kg every 3 weeks). Unfortunately, she developed marked allergic reaction to Paclitaxel which was immediately stopped after the first 5 minutes infusion. Paclitaxel was then substituted with Gemcitabine (1,000 mg/m2 on day 1 and day 8, repeated every 3 weeks) in subsequent chemotherapy cycles. Treatment was well tolerated but a few shots of prophylactic growth factors were needed in each cycle to boost marrow recovery. Her CA125 level rapidly normalized after the second cycle, and eight cycles of chemotherapy were completed (including the partially implemented first cycle). PET-CT scan after the 5th cycle had showed a complete disappearance of peritoneal deposits. After completion of chemotherapy, she was put on 3-weekly Bevacizumab maintenance, using the same dose, for ten additional cycles. No treatment-related side effects such as hypertension or proteinuria were observed. Her CA125 remained normal and further PET-CT scan after completion of maintenance targeted therapy showed no evidence of disease progression. She was last seen 2 months after completion of all systemic treatment and there was no sign of disease recurrence.

Discussion
Two recent positive phase III trials (GOG-0218 and ICON7) have led to the approval of Bevacizumab in combination with Carboplatin and Paclitaxel as first-line treatment for patients with advanced ovarian cancer.1,2 Bevacizumab is a monoclonal antibody that targets the vascular endothelial growth factor (VEGF) pathway, which has a critical role in the growth of ovarian cancer. In the GOG-0218 study, Bevacizumab dose was 15 mg/kg for up to 22 cycles (15 months total) whereas in the ICON7 study, Bevacizumab was given at 7.5 mg/kg for a total of 18 cycles (12 months total). Progression-free survival (PFS) was not improved in patients receiving only upfront combination Bevacizumab and chemotherapy without Bevacizumab maintenance.

The optimal dose of Bevacizumab remains controversial. In GOG-0218, median PFS was extended by 3.8 months (14.1 vs 10.3 months; p<0.001). In the ICON7 trial (which included earlier stage patients), the magnitude of PFS improvement was relatively modest (19.0 vs 17.3 months; p=0.004). However, a preplanned analysis of the ICON7 study data demonstrated that the benefit of Bevacizumab was actually greater in high-risk patients (International Federation of Gynecology and Obstetrics [FIGO] stage IV, or stage III and >1 cm residual disease), and there was no apparent difference in PFS improvement between high-risk groups receiving 15 mg/kg vs 7.5 mg/kg. Moreover, an improvement in overall survival in this high-risk group in ICON7 study was particularly encouraging (28.8 vs 36.6 months; hazard ratio [HR], 0.64; p=0.002). Although the current licensed dose of Bevacizumab is 15 mg/kg given 3-weekly, the ICON7 scheme of 7.5 mg/kg dose for 12 months is likely more cost effective and was therefore chosen in this patient.

Whilst Bevacizumab should be considered as first-line treatment for high-risk ovarian cancer patients, it may be reserved until first recurrence for those with optimally debulked disease with a lower risk of relapse. The OCEANS study, in which patients with recurrent platinum-sensitive disease were treated with Bevacizumab in combination with Carboplatin and Gemcitabine, reported a significant improvement in PFS with the addition of Bevacizumab (8.4 vs 12.4 months; HR, 0.48; p<0.0001), and strongly suggests a role for Bevacizumab in this setting of recurrent disease.3 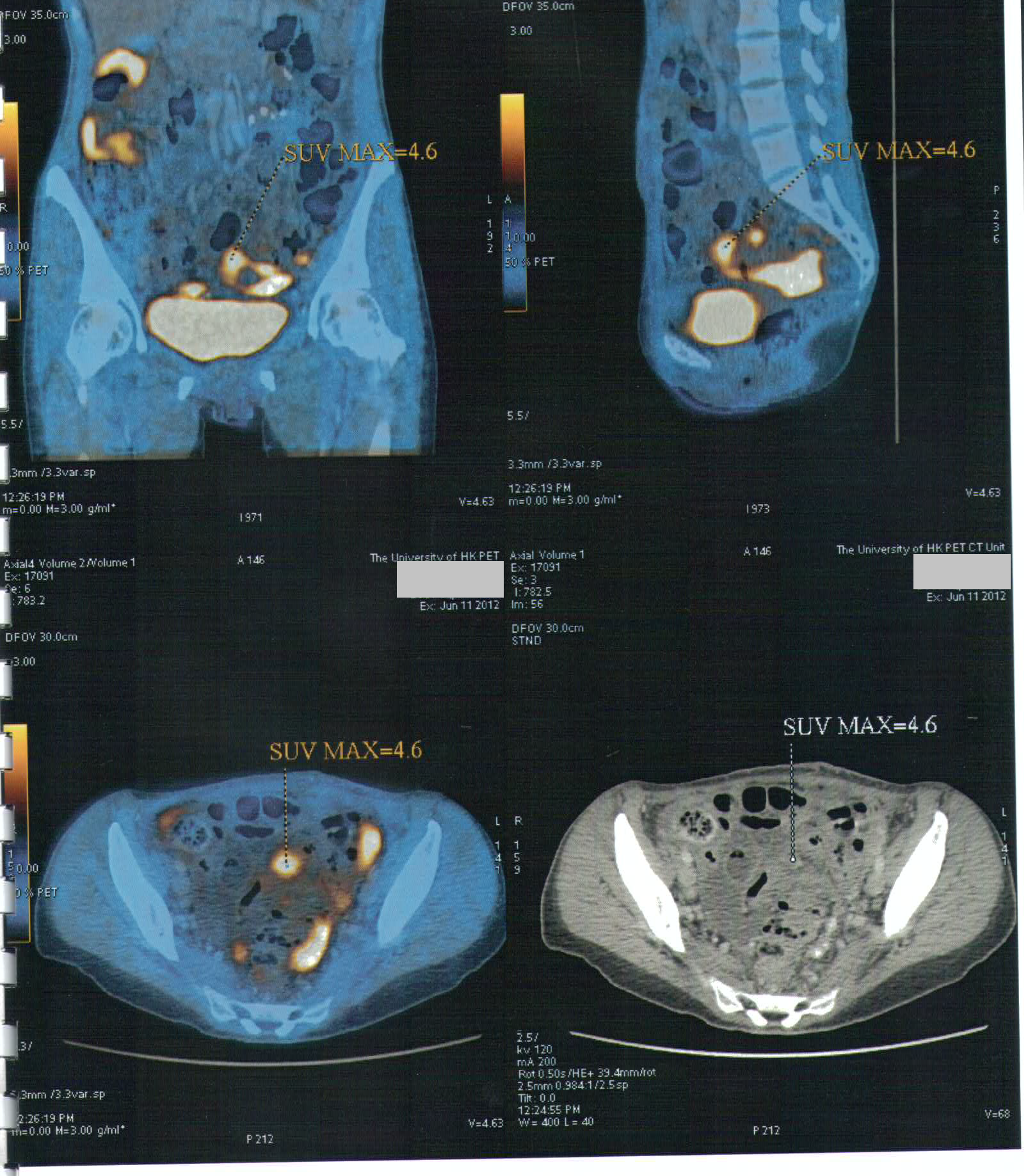 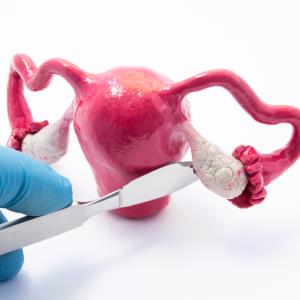